I came to Costa Rica with zero intentions of dating anyone. I had become quite the hater through college after a brutal engagement breakup (I’ll spare you the gory details) and I was ready to be single and free. Even though I always knew I wanted to live overseas, the thought of fleeing small-town Ohio was pretty appealing after that royal mess.

Anyway, I ended up moving in with a Costa Rican family so I could learn Spanish. I loved those people. They were patient with me as I said “sí” to just about everything since I understood just about nothing. Once I did start understanding more, I realized the Señora kept telling me to stay away from Costa Rican men. I figured she had some experience, so I listened and tried to steer clear. I made it through my first year successfully evading any advances from the locals, and then I was invited to a “non-threatening” girls’ movie night.

Obviously I was all about a relaxing girls’ night and I most likely wore something completely unattractive to complement my ratty hair. After being there a few minutes, and much to my dismay, a couple of Ticos (Costa Ricans) showed up.  Classic scumbags. Of course they would show up to a girls’ night party.

After I realized one of the guys was dating the girls at the party and that the other guy (Albin) was “dragged” into coming (or so he claims), and that they weren’t planning on leaving, I tried to make conversation. Albin swears that my first question was whether or not he liked sports. That is totally lame and I highly doubt it, but whatever. Turns out my initial assumption was wrong and these guys weren’t really scumbags at all. That being said, sparks did not fly, nor did we stay up talking into the night, and it definitely wasn’t love at first sight. In fact, it was a pretty forgettable night. I do know that Albin ended up driving me and a friend home so we didn’t have to walk in the dark… which I thought was nice. That was it.

Long story short, we became friends over the next several months but it was just that. He invited me out for my birthday and we ended up having more fun than we had expected. Still, I was not interested and didn’t think he really was either…until Christmas came along. Before I went back to Ohio for the holidays, he showed up with a present for me- a soccer jersey from the Sele (Tico national team). That’s when I knew this was something. I mean, those jerseys aren’t cheap.

Over break, we corresponded through some emails, and I remember freaking out when I read the words “Te extraño” (I miss you). Time to cut it off. Literally one of the first things I did when getting back into CR was have that depressing conversation. He took it like a man and totally backed off.

Fast forward a few months of hanging out in big groups with him. I really liked that he respected my space and that he was pulling off the impossible “just friends” thing like a boss. We became even better friends as time went on. Around that time, I felt God calling me to do a mission trip called the World Race, which was an eleven month, eleven country trip. I was super excited and began making preparations to leave. There was just one problem, I was starting to feel a little more than “just friends” with the party crasher.

One night as he was driving me home, we started talking about my upcoming trip. Mid-convo I awkwardly told him that he was making my life complicated. He was silent for a moment and then asked why. Now it was my turn to be all mushy and I told him, “Te voy a extrañar” (I’m going to miss you). I think he almost ran off the road.

A week later, I knew it was a little more than just missing him. We were at a music festival downtown and there were free tango lessons. Our friends opted not to participate, but Al and I went for it. The tango is pretty sensual, so obviously I was awkward and sweaty (have I mentioned my anxiety sweats?). At one point, the tiny French instructor came to us out of the million other people in the crowd and started critiquing us. He then proceeded to shove our pelvis’ together and moving our hips back and forth saying we needed to have more hip chemistry. It wasn’t sexual in the least bit (sarcasm). If you know me at all, you can imagine I was sweating profusely at this point. Thankfully, Albin didn’t seem to mind that I had sweat streaks down my shirt, which could be because he was distracted by the pelvis thrusting. As we continued making complete fools of ourselves and laughing, I fell in love. 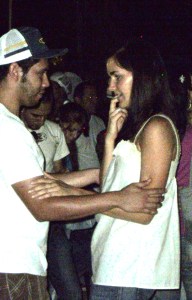 At this point, I was just starting to sweat…

The rest is history. Long story short (because I’m sure there are many more blogs to come about this), we dated for 18 months (17 of those 18 months we were in a long distance relationship. So hard. We don’t recommend it. At all. ) Then we got married.

Lots of pelvis thrusts and back sweat at this point lol

One thought on “How We Met”