One of my favorite stories from the time Mariah spent in the NICU is about some confusion the nurses had over Mariah’s skin color. When Mariah was born, she was a little purplish-looking. I’ve never birthed a biracial baby before, so I assumed Costa Rican babies came out a little more plum-colored than the average white kid. The not-so-comical part of the story is that Mariah was purple because her blood was septic and her collapsed lung was preventing good oxygen flow to her blood. Sadly, she was purple from bad blood.

Purplish? This is right after she was born and before we knew she was so sick.

At the time, everyone assumed with me that she was just going to be dark like her daddy. Albin’s not super dark; but he’s clearly Latino, and if you leave him in the sun too long (even with SPF 90 sunscreen), he claims that he turns so black that he’s blue (what does that even mean?). Anyway, my point is, she was dark and her hair was dark at first too. After we made it through the part of us almost losing her and then her miraculous recovery, she had to stay in the hospital for a while to finish the strong intravenous antibiotic she was prescribed. She was taken off the respirator and all the other monitors, tubes, and IVs had been discontinued.

As I arrived one morning to start my all-day vigil at her bedside, I noticed that she was hooked up to several monitors again. My heart plummeted and my out-of-control emotions took over and gave me a drippy nose and watery eyes. I shakily went to ask the nurse what had happened to Mariah overnight and here is how our conversation proceeded:

Me: Why is Mariah hooked up to all the monitors again? (Sniffle)

Nurse: Because she got a little white during the night.

Nurse: Well we thought maybe she was having oxygen problems or blood pressure issues and that’s why she turned white.

Me: Did you find any problems with her oxygen or blood pressure?

Nurse: No. It is so weird. Everything is perfectly fine. She is just so white.

Me (starting to smile): So her blood is getting better and she is turning white?

Me (cracking up): Have you seen her mother? Real white.

Nurse (starting to laugh): Do you think she’s just white like you? That would explain a lot actually. We don’t see a lot of bright white babies in here so it was a little surprising.

Me (thinking): If you want to see bright white, you should see my booty.

Turns out, my biracial kid is white with light hair. Everyone tells me she looks like a white Albin. I’m just thankful her blood is in good shape. The nurses and I had the rare chance to burst into laughter that day, and it was moments like those that kept me sane. We never would have thought that the healthier Mariah became, the lighter her skin would be. The good news is that she tans well because I can’t imagine the amount of money I would spend on sunscreen in CR if she was still as bright white as my rear. 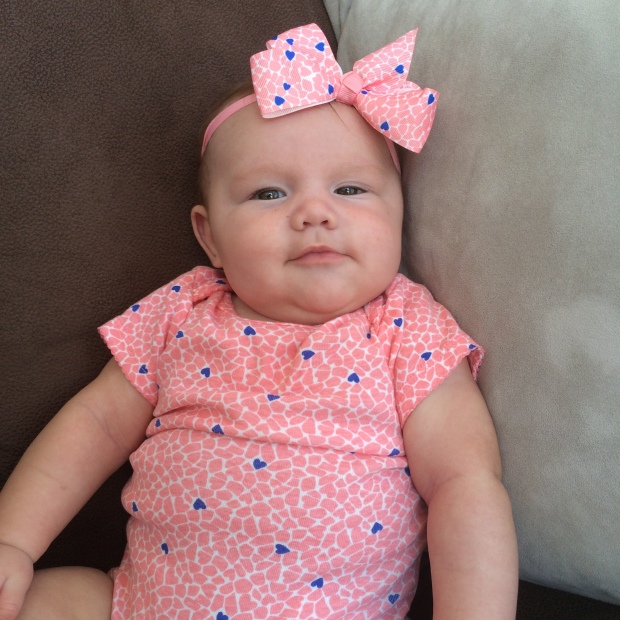 I love my country. I loved the U.S.A. before moving overseas, but being gone for the last seven years has stirred up some seriously deep patriotism in my soul that I wasn’t even aware was there. When Al and I were first married, I remember watching the opening ceremony of the Olympics with tears rolling down my cheeks as the U.S. athletes merely stood and waved. He thought I was ridiculous, but I didn’t care; those were my people.

Recently, though, I’ve felt embarrassed of and by my country in one particular area. As someone on the outside looking in, the way the U.S. looks to a lot of foreigners makes me want to hang my head in shame. We don’t get all the big headlines down here, but when I see one that says our tax dollars are going to the mass murder of babies and the selling of their organs, I literally feel sick to my stomach. With the recent release of the videos exposing Planned Parenthood for their base and inhumane treatment of little human beings and then the subsequent vote to continue supporting these gruesome acts by congress, I found myself doubting my nation that supposedly stands for “liberty and justice for all.”

I am incredibly grateful for the liberty that I have as an American citizen, but in this case, I think we’re taking advantage of the “liberty” and forgetting about the “justice.” I just can’t wrap my mind around how anyone can argue that murdering the most vulnerable human beings is a matter of choice. While a woman does have the liberty to sleep with whom she chooses, that liberty should not carry over to taking an innocent life because of her indiscretion. I see the liberty, but I see no justice in that. Can “justice for all” really exist if our government supports millions of abortions each year? And don’t even get me started on the detestable selling of the baby body parts.

My daughter was born premature and I remember sitting in the NICU just staring at all of the tiny babies fighting for their lives. These little people who were born at 25 weeks, 28 weeks, etc. were so fragile, but so alive. They were breathing, moving, and responding to touch. I was amazed at how incredibly cared for they were by the doctors and nurses. What amazes me even more is this: there are still people out there who say that if that 27-week old baby was still in the womb, the mother would have a choice to take the baby’s life. Why is it only considered murder if the baby is killed outside the womb at 27 weeks? Or why is someone charged with murder if they hurt a pregnant woman and she loses the child, yet a mother or doctor isn’t charged with murder if they choose to terminate that same baby’s life?

In Costa Rica, abortion is illegal and I’m sure Albin is proud of that. It is baffling to me that a country that is considered “Third World” and classified only as a “developing country” has a much higher moral standard than our so-called already “developed country.” The U.S. government financially aids the murdering of babies and selling their body parts? Which country sounds more “underdeveloped” or better yet, primitive?  It’s hard to believe that something comparable to Nazi doctors performing gruesome hate crimes is happening right in the United States and that there are a whole lot of despicable people who are marching down the streets to demonstrate their approval of it.
Like I said before, I love America, and I believe in this one nation under God. But today, I hate how easily she is allowing liberty to override justice. This experience has reminded me that there are ways of doing things in EVERY culture that are right and also things that are wrong. It’s important that we keep that in mind so that we don’t become imperialistic about our own culture and begin to take an honest look at the good…and bad in both.

About two weeks into our marriage, I was playing the dutiful wife and packed Albin an excellent lunch for work. It was comprised of a huge tuna sandwich, salad, probably a piece of fruit, and a snack. When he came home that afternoon he was scavenging through the fridge almost immediately. I casually asked if he liked his lunch and received a meek “sí” in response. Confused, I asked if he didn’t like tuna. He said that he enjoyed his lunch, but that he still felt a little hungry after a lunch that small.  I assured him that we would have a big dinner, but he didn’t seem nearly as enthused about that as I was. I began feeling slightly irritated that I even went to the trouble of making him a lunch if he wasn’t going to appreciate it.  Sensing my frustration, he slipped out onto the thin ice of stating how one’s culture does things. He said, “In Costa Rica, we are used to eating large lunches and smaller dinners.”

In my mind that was absurd. But we tried the whole “big lunch, small dinner” thing because I was going to overcome this whole living in a different culture thing. It was honestly like I had a Sunday afternoon food coma every. single. day. After eating my heavy lunch packed with carbs and topped off with loads of beans I was either out cold at my desk by 2:00 p.m. or locked up in the faculty bathroom learning about the side effects that black beans had on my “only ate baked beans once a year on July 4th” guts.

And from there we hit a stalemate. It became a thing for us. A little crack in our united front.  It was silly really; but while we laughed it off, it was a foreshadowing of our future of compromise and understanding that is inevitable for a bicultural marriage to succeed.

The issue with bringing two cultures together is that there are a lot of things. You’re bringing together two completely different outlooks on language, cuisine, relationships, government, etc. etc. etc., and it is a challenge. In a sense, all marriages are bicultural. No matter where each person comes from, the two bring very distinct opinions, stories, and beliefs about almost EVERYTHING. Maybe every marriage comes to a point where “living on love” crashes into the reality that you have to do life with someone that challenges what you thought was the “right” way of doing things. Despite the fact that my husband is a great man and I love him dearly, it is tough to swallow that my way isn’t always his way. When I first learned Spanish, I remember thinking that Hispanics said everything backwards. I mean why would you say “River Big” instead of “Big River?” When I finally opened my mind to accept that they weren’t speaking “backwards” and that their way of speaking made sense too, Spanish started to click and became a new normal. That’s what I want for our marriage. Realizing that no one has it backwards will help our relationship “click” and become our new normal.

As I said in my “About Me” page, I really feel a calling to talk about marriage between two people from distinct cultures. When we first got married, I started searching for information about bicultural marriages- stories, or self-help books or basically ANYTHING that could help me feel less alone; but there was an overwhelming lack of material.  I want to get the conversation started. I want to hear from others in the same situation who are fighting for their bicultural marriages. I want to know other people have to alternate having gallo pinto (Costa Rican beans and rice) and Honey Bunches of Oats for breakfast to keep the peace. Basically, I want to know we’re not alone, and that despite the struggle, there is a special kind of victory when compromise is found between two cultures.

So here it goes. I hope that as I tell my story of triumphs and trials, I’ll find community, support and guidance from others who are living what I am living.  This is my story, please feel free to share yours.