We’re at 27 weeks and my body is holding tight, praise the Lord! I found out that I had two infections that were causing a lot of the cramping from last week, so clearing those up has helped me feel a lot more comfortable.

The high-risk doctors I see every week are not overly concerned about how I have effaced since for now it seems to have stopped and I’m not dilating. They haven’t put me on bed rest, since apparently that’s not a “thing” anymore. There seems to be a lot of controversy about it, but the specialists I go to say that current research suggests that bed rest doesn’t really help avoid preterm labor. They do want me to take it easy and not lift anything heavy…like Mariah (ha!). I’ve done pretty well with not over-doing it, especially since my mom (and pretty much everyone else in my life) doesn’t agree with “current research” and think it’s common sense to take the pressure off the ol’ girl down south.

I did break the rules once this week when I was home alone with Mariah. We’ve been trying to potty train and she has pooped in the potty several times now (score!). Anyway, I was making lunch and heard her in the bathroom, so I rushed in only to find her with her hands submerged in the toilet bowl. Awesome.  My obvious reaction was to pick her up and carry her to the sink to minimize the amount of toilet water  being dripped everywhere. Mom fail in more ways than one. Ew.

I did better after that, though, because it was nap time and I had to try and figure out a way to get her in her crib without lifting her over. We brought in a step stool and a bar stool, climbed up, and had her put her leg over the side of the crib. Once I had her halfway over, I gave her a little nudge and she kind of flopped into bed. She looked at me kind of surprised and then we both started cracking up laughing lol.

Besides not lifting my tank of a child, I’m receiving Progesterone shots in the butt every week and getting those “digital” cervical exams. Did anyone else think for a second that “digital” meant some sort of machine was involved? Yah, it’s not like that. They’re just using the good old-fashioned digits. In fact, this week’s test was pretty comical. You may already know I’m a pro at failing gynecological appointments– but here is another one for the books. It was unseasonably warm last week, but the hospital didn’t turn down the heat, so by the time the doctor came in the examination room, I was a hot mess. Having already taken off my pants, I had been sitting (and sweating) bare-ace on that thin slip of “hygienic” paper that protects the chair. The little sheet they gave me to cover myself was doing nothing but creating a greenhouse effect over my lower half and I was pouring sweat. 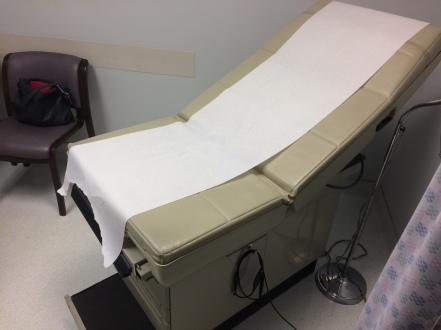 When the doctor, nurse, and student all came in for the special “digit” test, I tried to scoot to the end of the chair but the stupid paper was all sweaty and plastered to my butt. I tried to fix it with minimal exposure under the tiny sheet, but I’m too round to accomplish anything past my hips so I just flailed and thrashed until the paper was all torn and stuck to everything. The medical student tried to help, but it was no use. By the time the doctor snapped on her rubber glove, I had that useless tissue paper glued to my upper butt and even though I tried to arch my back to avoid it, the rest of my womanhood uncomfortably rested directly on the exposed vinyl chair that the rest of the world sits on.  Gag.

A little piece of my dignity died that day. But let’s be honest, dignity went out the door with “morning” sickness when I was puking my guts and peed myself at the same time.

Remember what I said about magical pregnancy unicorns last week? Yah, this is further proof that I am more like an awkward pregnancy hippo that isn’t very magical at all. At least it’s semi-comical.

Here’s to another week of pregnancy!