Nobody wants their marriage to fail, including me. Before I got married, not only did I not want to fail, I wanted my marriage to be wildly successful. I loved to win. I wanted to be the best at everything I did. My parents have an amazing marriage. In my mind, it was pretty near perfect. It hasn’t been easy for them, but they have set an incredible example. In my mind, their example was the standard. I was crushed when I found out that I couldn’t meet my own high expectations.

When Albin and I first started dating, a well-meaning missionary lady asked me to get coffee. She told me she had worked with several bicultural couples over the years and that they hadn’t had much success. She told me a few horror stories about her friends. In some cases, the problem wasn’t the cultural difference, the problem was that they married crazy people. There was, however, some truth to a lot of what she said and I appreciated that she cared for me. A little seed of fear was planted.

Throughout the rest of our dating relationship, engagement, and marriage, we encountered SO many people that were more than happy to give us any negative comment, horror story, or struggle they’d ever heard of in a bicultural marriage. Each time, another little seed of fear was planted in my heart. Comments about how we would be miserable, how Albin would treat me as a second-class citizen, how the Tico man/Gringa woman marriage was rated the most likely to fail (how does one even measure that?!). On several occasions I was told that I was crazy to stop traveling and get married to live in Costa Rica. I am not kidding you; the list could go on and on.

The problem was that the negative comments came so often that I started to believe them. All that fear became a huge ball of anxiety in my gut. Fear about things that weren’t even close to being true about my husband, about my marriage, or about my life. I was discouraged and had a hard time recognizing what was true and what were pure lies. We went through a lot of difficult challenges during that period, and each time I felt like all those negative people had been right after all. 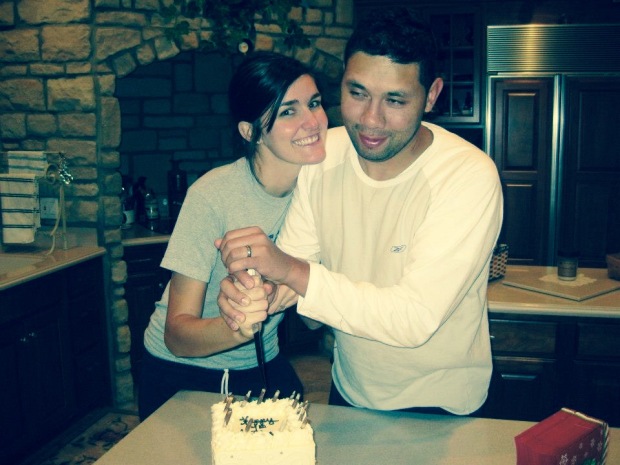 Here we are “cutting?” our first anniversary cake…

We finally went to marriage counseling and I told the couple we were working with that I felt like such a failure. I still wanted my marriage to be wildly successful, but I didn’t know if that was even possible based on all the negativity I had heard. One thing the counselor said totally changed my perspective.

You need to make your own success.

It’s simple, but it was the proverbial shot to the heart. I had been basing my idea of success off of what I saw from my parents, pictures on Facebook, my friends’ marriages, my unattainable expectations, etc. I was doing a lot of comparing, and that is never healthy.

Albin and I started praying that God would show us what His idea of a successful marriage was. Hearing His truth spoken over us was amazing. He showed us how to reject the negativity spoken over our marriage and how to set limits with people who were literally speaking death over us and stealing joy from our marriage. We started guarding our hearts and minds against all of the attacks.

We realized that we needed to make our own “culture” that worked for our family. We chose our favorite parts from each of our upbringings and instilled those into our family culture. I was reminded again that one of the very reasons that I was attracted to Albin in the first place was his culture and that he was different than anyone I’d ever met. I decided that I couldn’t let the negativity of others steal the joy from what is one of the things that attracted me to him in the first place.

Ultimately, our success comes from Jesus. He shows us what true success looks like. We can read over all the statistics in the world about bicultural marriages; but none of those statistics are taking into account that both of us are surrendered to Jesus and that a relationship with Him changes everything.

I still want my marriage to be wildly successful. We haven’t “arrived” by any means, but I can tell you that our perspective of success has changed for the better. Though we only have three and a half years of experience under our belts, we are on a mission to encourage all of you who are bicultural marriages and relationships out there. We want to be painfully real and extremely honest, but we also want to speak life, encouragement, and fight fear.

Just remember that what you’re fighting so hard for is worth it. It’s possible. You can be wildly successful.

And a note to my husband, Albin:

So many of the negative comments that were made about you and us were as far from the truth as possible. I will never be able to express how grateful I am to you for your faithfulness and unconditional love. The way you have loved me and our daughter (and our ridiculous dogs) is such a testimony to me. You are the most unselfish, caring, and patient man I’ve ever met. I am so glad that none of the Debbie Downers talked me out of marrying you. You are such a blessing from God to me and I wouldn’t have it any other way.